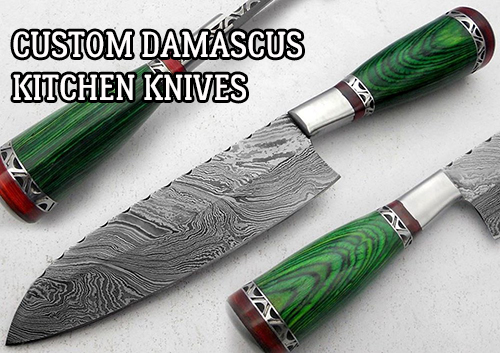 The Damascus knife radiates mystique with its own elegant pattern, hardness and durability. Imagine, your kitchen knives are more aesthetic, sharper and more durable, and they add value to excellent gift ideas, gathering and cooking in front of people. The kitchen knives with the beautiful DAMAS motif are at the forefront worldwide.

The History of the Knives of Damascus

Damascus steel was said to have been developed and used in ancient southern India, and steelmaking technology in India was superior and expanding in the Middle East. The steel was highly valued and the blade was transferred from a hidden, dynastic treasure. Today, however, the original method of making Damascus steel is neither known nor lost. Nevertheless, the beautiful texture of Damascus has been successfully reproduced using the latest forging technologies, processes and materials that may differ from those of Indian origin. In particular, Japan has developed its own excellent manufacturing process for forging katana knives (or swords) and kitchen knives (or sushi knives) that has been successfully applied to the extraordinary and sharp blades of Damascus. Therefore, we would be very happy to introduce you to these Damascus knives made in Japan.

The Knives’ Mysterious History in India “Damascus”, also called “Wootz”, is the name of a steel material with a wood motif and would come from ancient India. It is also perceived as one of the materials used to make a strong sword. Although the manufacturing process is not fully known, it is sometimes associated with some legend or mystery.

When did Damascus steel appeared for the first time?

In India, there is a huge iron column called “Delhi Iron Pillar”, which would consist of Damascus steel. It is believed to have been founded in the third or fourth century BC. On this basis, it should be assumed that the Damascus steel itself had appeared earlier than this period. This Damascus steel was famous for its unique and distinctive pattern that surfaced on the surface and is stainless. A scientific study of the “Iron Column of Delhi” has revealed a surprising fact: it is forged steel! (non-alloyed steel). The manufacturing process of Indian steel has long been appreciated. Round steel shears and another steel object were found in the old tombs near Wurre Gaon in Kamptee, which dates back to 1500 BC. Were manufactured. This means that these steel objects were made several centuries before the foundation of the “Iron Column of Delhi”. “Damascus steel” was considered suitable for a blade and not for a column. The following examples are often cited to illustrate the quality and sharpness of the Damascus Blade: “If a silk scarf falls edge-on on a Damascus blade, the scarf will be cut in two seconds because of its weight.” “Damascus The blades are never struck, even if they are used to cut an iron armor. “It is as resistant as a willow branch. It does not break, even if it is folded. It only takes a second to return to its original state. Release a blade and you will find that it immediately returns to the same state as before. “All these sounds seem a little over the top, but they describe exactly what” Damascus Steel “is all about, not only the blade quality, but also the secret – the strength, the unique surface pattern and the rust resistance – are the main reasons that the above examples are likely to do At the time of the Crusaders, the Swords of Damascus gained an unprecedented reputation and had been inherited as the legacy of royal families, and the Crusaders were proud to have a Damascus sword, as the recent study has revealed , rustproof and resistant feature of the Damascus blade in the manufacturing process, in which forms their specific pattern.

Damascus steel was so famous that it was often exported from India to neighboring countries while its manufacturing process was not yet communicated. It is said that the manufacturing method was transferred from father to son only; Therefore, there are only a limited number of people who are familiar with steelmaking. Shortly thereafter firearms appeared and gradually replaced the steel of Damascus. The production process of Damascus steel ended 200 years ago, which made it very difficult to reproduce the entire process.

The Damascus Kitchen Knives of this Day and Age

The “Damascus” steel currently used in high-end Hocho knives is a laminated material forged with various multilayer steels and a pattern similar to that used in forging Wootz steel. Currently, layered materials with a hard core material interposed between the two are forged and ground to a Damascus knife. The hard and brittle core material is surrounded and protected in its structure of sticky and stubborn layer materials, making the Damascus knife not only very sharp, durable and rustproof, but also elegant. For this reason, making a knife with a beautiful damask pattern has recently become very popular. In addition, Japanese design, historical sword making technology, and traditional Japanese craftsmanship add a fascinating touch to a Damascus knife, making it even more popular around the world.

Be sure to check out this incredible listing of Damascus steel kitchen knives here.